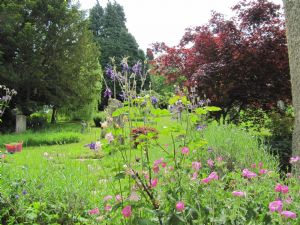 Part of this Churchyard is now being managed as a wildlife conservation area.  Some parts are being left unmown until the plants have seeded and to provide food and shelter for insects and birds. Churchyards are unique today in not having been ploughed, fertilised or subjected to weed-killing chemicals for centuries – in our case from around 1000AD. Because of changes in our countryside, areas like this are especially valuable and should be cherished.

For centuries churchyards were maintained simply by allowing farm animals, especially sheep, to graze. The Victorian era was characterised by church renovation and the introduction of more elaborate grave stones and memorials. At this time animals began to be excluded and replaced by close cutting of the grass with the newly invented lawn mower. Thus the well kept and “manicured” graveyard became the norm. With the present day smaller congregations and the rising cost of manpower many churchyards have become overgrown and provide a safe haven for wildlife.

Recognising this, the Church and the Nature Conservancy Council started a scheme under the heading “The Living Churchyard” to manage suitable churchyard areas for conservation, and our scheme for St Peter and St Paul’s, Nutfield is part of this larger project. The conservation program has the support of Prince Charles who wrote the following  in 1990.

“Older churchyards were carved out of a meadow when the church was first built.  These represent a considerable proportion of the last remnants of original meadow grasslands, unimproved by modern agricultural practices. The environment is nothing less than God’s Creation and a churchyard is commonly known as God’s Acre”

Some people, brought up in an era of carefully maintained churchyards may see a “conservation” churchyard as a sea of weeds. However with the developing interest in nature conservation generally, understanding and appreciation is growing. A weed has been defined as any plant which is out of place. Thus for some people wild flowers are out of place in a churchyard.

Our project began in 1998/1999. Our first task was to restore and replant the boundary yew hedge. This was undertaken in spring 1999 and the hedge is now mature. In 1999 we began having working parties and were thrilled with the response. We initially cleared brambles and undergrowth and instigated a cutting regime for the grass. Ken Hamilton has been an enormous help with jobs we are unable to tackle ourselves, such as clearing and planting the hedge, removing dead trees and cutting the hay each year.

In autumn 1999 we planted numerous wild flower bulbs including snowdrops, near the church door, and 1500 narcissus pseudonarcissus (wild daffodils).

We have planted more bulbs most years and have wonderful displays of aconites, fritillaries, crocus, bluebells and alliums. The churchyard is at its best in the spring when the bulbs are in flower beside the drifts of primroses.

In January 2001 we relaid the path from the yew arch, replaced the broken hand rail and installed a new light.

In autumn 2001 we put up an owl and a kestrel box. To our great delight in January 2003 owl pellets were found beneath the box. Other nesting boxes have since been erected and many of these are in regular use.

In 2008 we planted our Millennium Yew Tree in the south east corner of the church yard. This was grown from a cutting taken from the yew tree at Ulcombe Church in Kent, believed to be more than 2000 years old. The Millenium Yew Tree project was instigated by David Bellamy to provide all the parishes in England with a yew tree grown from a cutting taken from a tree which was more than 1000 years old.

The work continues and the group meets on the first Saturday of each month. Our tasks include clearing undergrowth, haymaking, planting bulbs and cutting back. Anyone is welcome to join in – no skills are required.