The Tower and its Bells 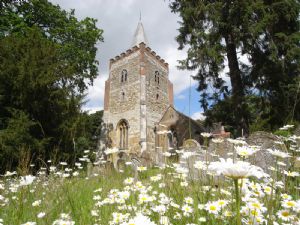 The tower was built in about 1475 and has four main stages. The ringing chamber is on the first floor. On the second floor is a room currently used for storage known as the Churchwardens room.  The bellchamber occupies the top floor.

The bells are set in a timber frame. Each bell is mounted on a wooden wheel and the ropes run in a channel on the rim of the wheel. The ropes pass through the vacant second floor room to the ringing chamber on the first floor, so we have what is known as 'a long draught'.

In 1553 the crown seized most of the church goods, but the bells were allowed to remain "until the king's majesty's will be better known". The present six bells are of various ages: 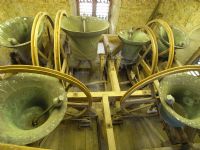 Shown left are Nutfield's six Bells. The treble bell (2nd from the right at the back)  is mounted on a metal headstock. The other headstocks are wooden. The ropes go round the rim of the wheels, giving immense leverage, so that turning the heavy bells is made lighter work.