Welcome to this delightful old Parish Church, which has served the people of  Nutfield for nigh on a thousand years.  We hope that as you wander  round  you will begin to feel the indefinable atmosphere of worship and prayer.  Over the centuries the people of Nutfield have come in good times and bad to draw strength, guidance and comfort from Almighty God.  They have brought their babies to be baptised; they themselves have stood by the 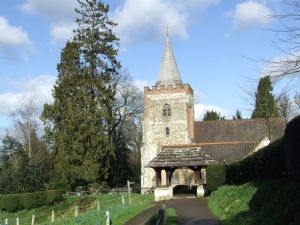 chancel steps to be confirmed, and later to be married.  Sunday by Sunday; on Saints’ days and Festivals they have come, as a family, to God’s house and have praised His Holy Name; have received the sacrament of Holy Communion, the Bread and Wine of Life; have given thanks for mercies received. At journey’s end, their bodies have been laid to rest in the churchyard, in confident hope of eternal life in the “Father’s house of many mansions”.

The church and village are mentioned in William the Conqueror’s Domesday Book. William had presented Nutfield and its Saxon(?) church to Ida, wife of the notorious Eustace of Boulogne. When she settled in, the church was restored, just a simple stone chamber of nave and chancel.  Later, perhaps about 1140 AD, rebuilding began in earnest. The North wall was taken down and the present pillars inserted to provide the North Aisle (notice the chisel marks of those ancient masons).

The next big step occurred round about 1300 AD, when Sire Thomas de Fulham, whose tomb is in the chancel, became Rector. Now the Chancel was lengthened by some 10 feet, and the roof heightened. (You can still see the marks of the old roof).  In the south wall near the altar you will also see the ‘piscina’, something like a small sink, where the priest rinsed the communion vessels.  The Chancel arch was widened and possibly the South transept, ‘The Lord’s aisle’ was built.  Notice those distinctive features, known as ‘broached chamfer stops’, little triangular pyramids which finish off the corners at the bottom of pillars, etc.  They seem to be Thomas’s trade mark.

This extended church served the community well until the railways provided easy communication with London and wealthy families took the opportunity to build large country houses for big families and accompanying staff.  Thus more space was needed and, copying the previous extension, the south wall was taken down and pillars inserted, but this time, no marks of the masons’ chisels!  If you go outside and inspect the side pillars of the door of the South Porch, you will notice a curious feature, when the stones were re-erected they were mistakenly put on the wrong side and upside down!  While outside take a quick look at the Sundial, still working after two centuries!

So much for the actual building.  An expert will study the window frames and tell you they are Norman, Early English and so on. Purists will point out the mistaken ideas of the  restorers, - the ‘Gothicised’ Tower and the ‘Victorianised’ chancel, but remember always that these were village folk trying to do their best for ‘their’ church, and I think you will agree they did very well indeed. 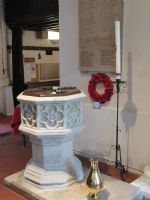 As for the interior furnishings, perhaps the most interesting is the Font. A typical standard ‘perp’ font in local stone, on a pedestal, octagonal with carved quatrefoils and rosettes. So far so good, but look at the date on the pedestal, 1665, with the initials of the Church-wardens.  It is suggested that the font was thrown out by the Puritan ministers, who did not favour infant baptism, but recovered and replaced at the Restoration under Charles II. At that time also a delightful silver chalice and paten  (now, alas kept at the bank for fear of thieves), was presented to the Church.

The screen is obviously very old. In the middle ages the screen was known as the ‘rood’ screen, and many carried statues of Jesus on the cross with Mary his mother and John the Beloved Disciple at his side.  The pulpit itself, which previously stood on the opposite side of the chancel arch, is made of Tudor or Jacobean in foliage and band pattern panels, but was probably made much later, and set on its delightful ‘wine-glass’ pedestal. 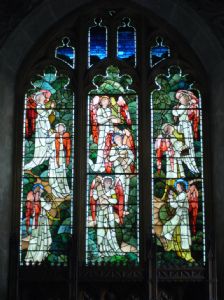 The stained glass is a very special feature, especially the beautiful East Window, showing the worship of the angelic host in Paradise.  This window, which is a veritable ‘window into heaven’, and never ceases to inspire, was designed by the very famous artist, Sir Edward Burne Jones and made in the studios of William Morris. 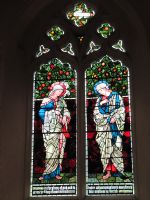 There is another window of this Pre-Raphaelite artist in the South Transept, depicting Mary and Elizabeth, the mother of John the Baptist.

Also in the South Transept, a modern window of  St Christopher and St Nicholas.  In the south wall of the chancel is another modern window, depicting St Peter and St Paul, our two Patron Saints, and the arms of Winchester Diocese and Jesus College Oxford, Patrons of the Living since 1675 AD.  (Did you spot the squirrel eating nuts? Look higher!)  Our only mediaeval glass is in the central window of the North Aisle.  One can pick out the vignette of Michael slaying the dragon.

We are fortunate to possess a ring of six bells, some of them dating back to 1662. The bells are regularly rung for Sunday worship and on important parish or state occasions.

There are several interesting monuments in the Church.

We have already looked at the tomb of Thomas De Fulham in the chancel. His inscription, in ‘Lombardic’ script, is decorated with a ‘foliated’ cross carved in the stone. Near him on the wall to the East are the brass figures of William Grafton and his wife, and the inscription which asks us to pray for him. He was once the ‘clericus’ of this church.  He and his wife are in civil dress.

Opposite, on the North wall, is a fascinating alcove behind a brass memorial plate, the ‘ghost cupboard’!  Was it the Easter sepulchre, or simply a cupboard, in the days before vestries were thought of?  The poignant memorial is to a young American lad, Augustus Longstreet Branham, who died on his way home to New York after a visit to this country. There is a Hall of Residence named after him in Oxford, Mississippi. 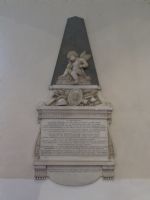 On the wall of the North aisle is the memorial to Peter Eligé, a splendid creation in white marble, topped by a weeping angel and military arms.  This commemorates Peter Eligé, who died at the storming of Salamanca, in Wellington’s war against Napoleon.

Opposite, by the South door, is a marble memorial to Major Budgen who fought at Waterloo.  To the East is a memorial to James Stark, a well-known artist who lived for a time in South Nutfield.  Next to him is a delightful epitaph in Latin, on a dark pewter plate, in memory of Edward Molyneux, 1605 AD, a Papist recusant, ie one who refused to take the solemn pledge of loyalty a second time, when monarchs changed from Catholic to Protestant.

It need hardly be said that the most important and poignant memorial is the War Memorial on the West wall which bears the names of those many Nutfield men who gave their lives in the First and Second World Wars. May their sacrifice and memory be honoured, and may they rest in peace!

In the churchyard, notice the ‘Pre-Raphaelite’ house tombs, and the defiant inscription on the stone path leading down from the West door.

There is so much more one could say about this fascinating Church, which has stood here down the centuries, and witnessed the whole panorama of English, and indeed world history.  We hope you have enjoyed this short tour and will come back for more.  You will, of course, be very welcome to join us for Sunday worship.  We are a very friendly congregation.  If you are traditionally minded, you will be pleased to know that, for better or worse, we still stick to the 1662 BCP and the Authorised Version, and try to maintain a very high standard of Anglican choral music.