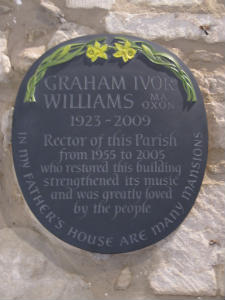 Following the death of the Reverend Graham Williams in 2009, it was decided by the Parochial Church Council, that a fitting memorial should be commissioned. This would be a lasting tribute from the people of St Peter and St Paul, Nutfield and others who were touched by his work in the community, to show their deep regard and thanks for his fifty years of service at the church.

The search began to find a suitable artistic stone mason. Members of the congregation were impressed by some beautiful work that was exhibited by The Memorial Arts Charity. This was viewed while visiting West Dean Gardens and Arboretum in Sussex on a church gardeners’ trip. The charity was contacted and the connection made with the established letter-carver, Richard Klose, who was subsequently commissioned to carry out the work.

Richard has used Welsh slate and decorated the memorial with daffodils which seem most appropriate given Graham’s Welsh heritage. The wording for the plaque was suggested by the Reverent Peter Moseling and this was approved by the PCC.

As the church is an historic, listed building, the Rector had to apply for permission in the form of a Faculty from the Diocese and contact various other official bodies. This was followed by a notice in the local newspaper to inform the general public in case of any objections.

The plaque was completed and installed in the Chancel of the church where it sits beside three other memorials to former Rectors of the parish. It is a significant addition to the beauty of the building. The Bishop of Southwark led the congregation in a Service of Dedication on 12 February 2012. This was attended by Graham’s family and many others whose lives he touched.